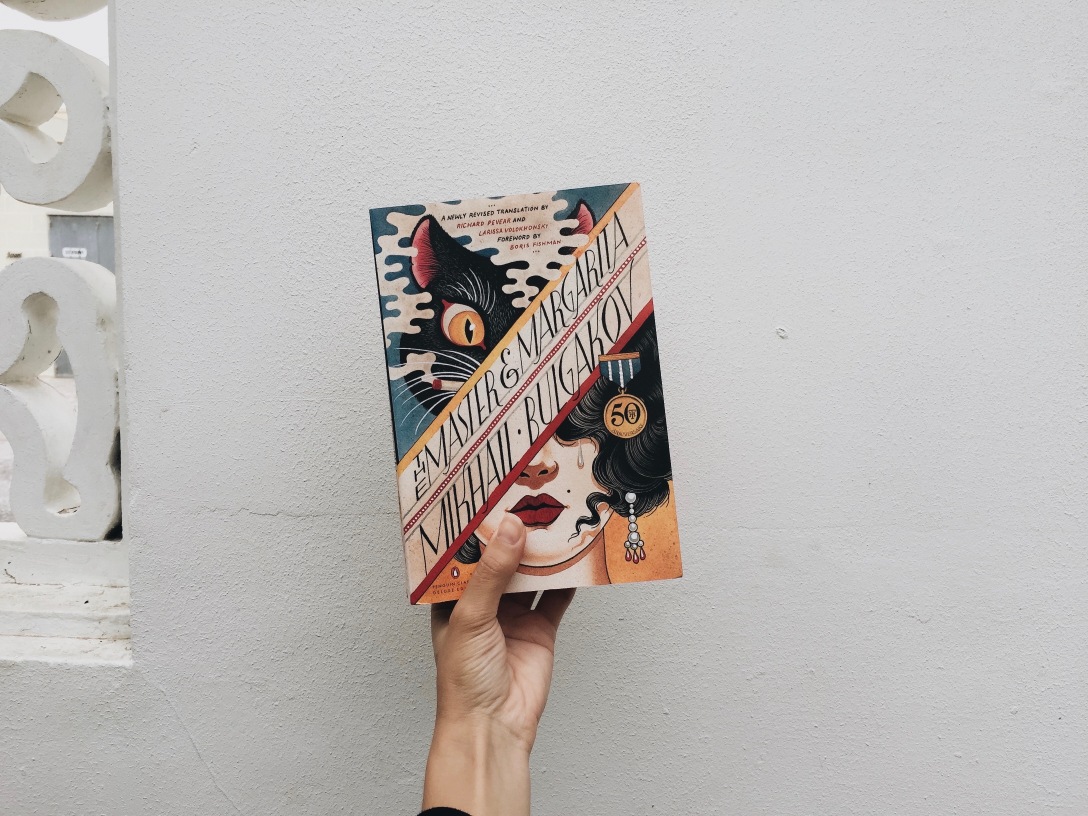 The Master and Margarita takes place in the same setting where it was written- the USSR at the height of the Stalinist period. During that time, artists had to work under strict censorship and were often subject to imprisonment, exile and sometimes even death. Thus, for Bulgakov, there was never any question of publishing the novel, especially one that is consistently and comically critical of authorities. And yet, almost three decades after his death, the book was in fact published (1967), thus becoming an enduring example of how defiant, powerful and indestructible art is. “Manuscripts don’t burn”.

So, what is this book really about? Well, just imagine one spring afternoon in Moscow, when without preamble, along comes Satan with his fascinating retinue of demons. Weaving themselves out of the shadows, they create their own brand of creative mischief. The result is utter chaos in which all sense of reality is completely lost. People vanish, die or become either terrified out of their wits or humiliated. Before Woland’s arrival, a certain writer who dubbed himself the Master, had written a novel about Pontius Pilate which was dismissed by the authorities and was thus sent into a mental asylum. Margarita, the Master’s clandestine lover, eventually makes a pact with the devil to save her companion. Mikhail Bulgakov’s fantastical satire of Soviet Russia combines these three distinct yet interwoven narratives: we observe Stalinist Moscow through the antics of Woland and his demons; the story of the Master and Margarita and finally the story of Pilate in ancient Jerusalem, presiding over Jesus’ trial. Simply put, throughout the story you will surely meet:

This book took me by surprise, mainly for it’s multitude of different elements that together make up something quite unique and striking. There are elements of political satire, dark comedy, magical realism and quite a different take on Christian themes and theologies, along with a meditation on love, art and redemption. It is also a highly philosophical book that explores the ambiguity of ‘good’ and ‘evil’. Woland’s evil manifestations, reminiscent of Stalin’s actions towards his political enemies, contrast greatly with his force of good in reuniting the Master and Margarita. What would the world be without shadows? Exceedingly bright probably, painful to our eyes. Each character is too complex to fit inside a simple framework of good and evil, even though it is very tempting to do so just because it becomes easier for us to take sides. But we have to admit that no one is one shade of colour, and it is only limiting our sense of who we are by doing so.

“But would you kindly ponder this question: What would your good do if
evil didn’t exist, and what would the earth look like if all the shadows
disappeared? After all, shadows are cast by things and people. Here is the
shadow of my sword. But shadows also come from trees and living beings.
Do you want to strip the earth of all trees and living things just because
of your fantasy of enjoying naked light? You’re stupid.”

The political satire in the novel seeks to expose the hypocrisy of Soviet life, but Bulgakov had to execute this through tact and with limited methods due to a threat of censorship and execution. Hence the brilliant dark humour and the different narratives. Pontius Pilate’s narrative adds an atmosphere of suspicion, paranoia and intrigue, colouring the dark humour in the Moscow narrative. By implying vague references in the Jerusalem narrative, Bulgakov still managed to put the message across. Bulgakov also highlights through Woland the cowardly side of society. “Cowardice is the most terrible of vices”. We observe this through multiple scenarios: Pilate’s decision to approve the execution of Yeshua since he cannot show a position of weakness; the state approved writers who were more interested in food and comfort than in using their art boldly; the obsessive bureaucracy with citizens reporting each other to the secret police. In contrast, Margarita’s courage becomes more apparent in turn and we observe this in her search for the Master and in her complete belief in the potential of his manuscript. She was willing to put herself at unknown risk by agreeing to host Satan’s Ball with Woland. Ultimately, courage is was led her to her love and redemption.

This magical novel is an unrivalled ode to art. There is an marked contrast between authentic art-the Master’s art-art created from intellectual independence, sacrifice and emotional vulnerability, and the art produced by the writers of the Massolit group. The latter were focused more on food and revelry and in using their words to tow the party line and meet the ideological approval of the government. Put simply, the writers of the Massolit group do not produce real literature but work that might seem like literature when in fact it is no more than propaganda. True art is timeless and no fire can ever manage to eradicate it.

“Is that vodka?” Margarita asked weakly.
The cat jumped up in his seat with indignation.
“I beg pardon, my queen,” he rasped, “Would I ever allow myself to offer vodka to a lady? This is pure alcohol!”

I truly revelled in the novel’s delectable burlesque and hilarious scenes. The writing flows beautifully and is incredibly comical. Woland’s antics are highly entertaining and you are compelled to keep on reading just to see what his next move will be. It is truly an incredible work of magical realism, with superb and intricate storylines and beautiful imagery. It is now one of my favourite Russian classics and definitely one that needs to be reread multiple times to fully appreciate the extent of Bulgakov’s genius.